Stretching almost 50000 square kilometres across the red-orange sands of the Namib Desert over the Naukluft Mountains to the east, the Namib-Naukluft National Park is Africa’s biggest wildlife reserve and the fourth largest in the world. Despite the unforgiving conditions, it is inhabited by a plethora of desert-adapted animals, including reptiles, buck, hyenas, jackals, insects and a variety of bird species. One of the main attractions of the park are the ancient dunes of Sossusvlei, home to some of the tallest dunes in the world rising over 300 metres from the desert floor. This magnificent landscape features, rolling dunes, rugged moonscapes, lagoons, wetlands and mudflats. Visitors can look forward to a number of impressive sights including: the picture-perfect Dune 45, standing 170 metres high; the Welwitschia Plains, otherworldly lunar terrain dotted with the endemic plants; and the Dead Vlei, a photographers dream. 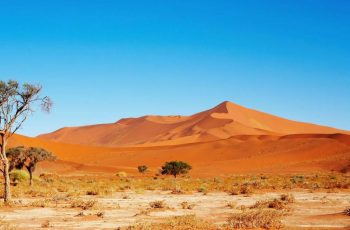